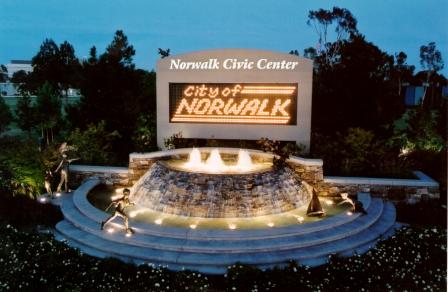 The City of Norwalk was incorporated on August 26, 1957 becoming L.A. County's 66th City. Located in the midst of some of Southern California's most accessible highways in the greater Los Angeles area, and located only 17 miles southeast of Los Angeles, the 9.35 square miles that make up the City of Norwalk have become one of the most rapidly developing and growing communities anywhere in the state of California. The City of Norwalk is approximately 95 feet above sea level, has an average temperature of 63 degrees, and averages an estimated 10 inches of rainfall per year. The City of Norwalk proudly celebrated its 50th anniversary as a city during 2007, and with a community sense of pride and accomplishment, eagerly looks forward to an even brighter future. The City is governed by five council members a year on a nonpartisan basis. The mayor and vice mayor are selected each year by the council members. The city uses the city manager form of government. Council meetings are held at 6 p.m. on the first and third Tuesdays of the month in the Council Chambers, located at City Hall. All council meetings are open to the public and members of the community are encouraged to attend and bring their views to the council.

The City is a general law city, and contracts for services in law enforcement with the Los Angeles County Sheriff's Department, and also contracts out for fire, water, street sweeping, and trash disposal. The City is served by one of the nation's most successful and responsible municipal transit services, the Norwalk Transit system. In business, education, government, and law enforcement, the signs of growth serve as evidence for a bright future. Norwalk's parks and community recreation programs are administered by the City's Recreation and Park Services Department. The parks system consists of 12 parks with a total of 87.3 acres of land.

An additional asset to the city is, of course, its location. Norwalk sits at the heart of an expanding regional transportation network which is an outstanding convenience to residents that work anywhere in Los Angeles or Orange Counties. The community is served by four freeways: the 91 (Riverside) Freeway borders the city to the south, the 605 (San Gabriel) Freeway is at the city's western border and the Interstate 5 (Santa Ana) Freeway passes through the community and Interstate 105 (Century) Freeway which runs from Norwalk to the Los Angeles International Airport, thereby providing additional access to even more important business and recreational points throughout the state. Two commuter rail lines serve Norwalk: the Metro Green Line, with connections to downtown Los Angeles, Long Beach, and LAX; and the MetroLink system, with connections to Orange, San Bernardino, Ventura, Riverside, San Diego counties, and the Union Station in Los Angeles County. Norwalk's access to regional transportation is unparalleled in Los Angeles County.

Time has always brought many changes, and the City of Norwalk is no different when it comes to change. Today, with a population approaching 110,000 Norwalk's future continues to be as bright as the California sun as today's modern pioneers work together for a better community in which the residents of Norwalk can be proud. But to understand completely the overall importance of the City of Norwalk and its bright and important future, one must have a full understanding of its rich heritage.

Initiated by the City Council and drawn from extensive community input, the 2020 Vision plan sets clear, measurable goals to guide Norwalk's operations up to 2020. We invite you to review the plan and thank you for your ongoing input, trust and support.

Click here to view map of Norwalk and surrounding communities.

Originally, the land that became known as "Norwalk" was home to the Shoshonean Indian tribes. They survived primarily on honey, an array of berries, acorns, sage, squirrels, rabbits and birds. Their huts were part of the Sejat Indian village.

In the late 1760s, Spanish settlers, Padres and missions flourished in the area. In 1833, the Mexican government passed the Secularization Bill, which returned the land to the Indian tribes. However, the Indian tribes suffered the loss of much of their culture, and were unable to successfully cope with the return of their land.

The Rancho and mining days in California ended around the 1860's and the land was subdivided once again and made available for sale. Word of this land development reached the Sproul Brothers in Oregon. They recalled the fertile land and huge sycamore trees they saw during an earlier visit to the Southern California area. In 1869, Atwood Sproul, on behalf of his brother, Gilbert, purchased 463 acres of land at $11 an acre in an area known as Corazon de los Valles, or "Heart of the Valleys."

By 1873, news of a railroad service coming through the area was committed. The Sprouls deeded 23 acres and stipulated a "passenger stop" clause in the deed. Three days after the Anaheim Branch Railroad crossed the "North-walk" for the first time, Gilbert Sproul surveyed a town site. In 1874, the name was recorded officially as Norwalk. The Museum is open on the first Sunday of the month from 1:00 - 3:00 p.m. Tours for groups of 10 or more are also available by appointment. Please call (562) 929-5702 for more information.

While a majority of the Norwalk countryside remained undeveloped during the 1880's, the Norwalk Station allowed potential residents the opportunity to visit the "country" from across the nation. This pre-1900 era also brought the "first families" to Norwalk, including the Sprouls, the Dewitts, the Settles, the Orrs, and many others. They grouped together to shape the future of this community.

In 1880, D.D. Johnston pioneered the first school system in Norwalk. Johnston was also responsible for the first real industry in town, a cheese factory, by furnishing Tom Lumbard with the money in 1882.

Norwalk celebrated the famous "Gay 90s" with the construction of a number of fine homes that were located in the middle of orchards, farms and dairies. One of those residential landmarks was built in 1891 by the D. D. Johnston family, and it subsequently became known as the Hargitt House, an 1891 Victorian Eastlake. Today, you have the opportunity of visiting the Hargitt House Museum, located at 12426 Mapledale, which was donated to the people of Norwalk by Charles ("Chun") and Ida Hargitt. The Museum is open on the first and third Saturdays of the month from 1:00 p.m. to 4:00 p.m. Tours for groups of 10 or more area also available by request. Please call (562) 929-5702 for more information. On the day of your visit, please call the Museum directly after 12 noon at (562) 929-5612 if you have any questions.

At the turn of the century, Norwalk had become established as the dairy "Heart of the Valleys." Of the 50 local families reported in the 1900 census, most were associated with farming or with the dairy industry. Norwalk was also the home of some of the largest sugar beet farms in all of Southern California during this era. As the years passed, the community continued to grow. Permanent educational facilities were constructed, electricity and telephone service installed, and railroads and highways linked Norwalk to statewide markets.