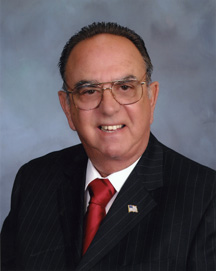 Vice Mayor Vernola was born in Los Angeles and has lived in Norwalk since 1944. His parents immigrated here from Italy, settling in Norwalk. Together, they raised Luigi, his sister and brothers with the same values they were raised with: get as much education as possible, work hard, provide for your family and give back to your community and church.

Vice Mayor Vernola attended local schools and graduated from Norwalk High School. At the age of 20 he started his own business as an automotive service station owner. He expanded his business to include a towing company and an automotive shop.

While at Norwalk High School, Luigi met his future wife, Joan.  They later married and remained in Norwalk, where they raised three children: Kristina, a teacher;  Thomas a law enforcement officer; and Lisa, a businesswoman. Luigi and Joan are blessed with eight grandchildren.

Vice Mayor Vernola chose to run for Norwalk City Council because, like many residents, he firmly believes Norwalk's best days are ahead of us. As a local businessman he knows firsthand the responsibilities of running a successful company. He makes fiscal accountability his top priority. "We have to be smarter about spending city funds. Each tax dollar will be spent wisely and have a direct benefit to our residents." He also considers public safety and community engagement as crucial to the health and success of Norwalk.

Please note that all emails to City Council and City employees are considered public records and are subject to disclosure to the public and/or the media.